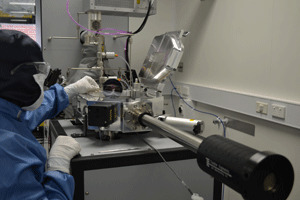 A NASA engineer has achieved yet another milestone in his quest to advance an emerging super-black nanotechnology that promises to make spacecraft instruments more sensitive without enlarging their size. A team led by John Hagopian, an optics engineer at NASA’s Goddard Space Flight Center in Greenbelt, Md., has demonstrated that it can grow a uniform layer of carbon nanotubes through the use of another emerging technology called atomic layer deposition (ALD). The marriage of the two technologies now means that NASA can grow nanotubes on three-dimensional components, such as complex baffles and tubes commonly used in optical instruments.
See on www.cemag.us